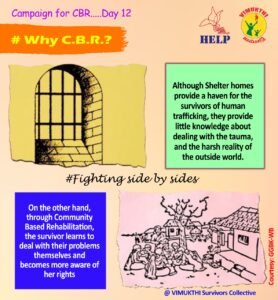 AN OPEN LETTER TO THE MINISTER FOR WOMEN & CHILD WELFARE, Government of Telangana

With this letter we, the Members of Vimukthi -A State Level forum of Sex workers and survivors of trafficking and HELP organization, would like to express our utmost concern regarding the issues and challenges facing by the rescued victims of trafficking with regard to their rehabilitation, re-integration and victim-witness protection services which have been taking place both in Telugu states of Andhra Pradesh and Telangana over the last few years. Further, we wish to bring few concerns over the issue of 14 women escaped from the Government funded shelter home in Hyderabad and over the response by the Joint Director (Schemes), Dept of WD&CW, Govt of Telangana on this incident.

That 14 women would have escaped from Government funded shelter home in Hyderabad may be distressing, if not surprising. One wonders what would have triggered a group of young women run away from a shelter, breaking open a metal grille of a window. As an organisation that has run shelters for survivors of trafficking and children of sex workers for 22 years, HELP is well aware of the challenges involved in running institutional care facilities and can speculate on some of the reasons that residents in such shelters may have wanted to leave the shelter home. What is further distressing is the statement reported in various news articles by the Joint Director (Schemes), Dept of Women and Child Welfare, Govt of Telangana claiming that the survivors of trafficking ran away because they wish to continue in sex work, and that nothing was wrong with the services/ conditions in shelters. According to Kasturba Gandhi National Memorial Trust, the organisation that runs the shelter, the women may have fled because they were afraid of being stuck in the shelter for a long time. One of the women who escaped the shelter had petitioned the court for release, and the court rejected her plea.

This incident exemplifies everything that is wrong with the current system of rehabilitation of survivors of sex trafficking.

Our choices in life are always between the options and we choose what is better between the options, or if all options are bad, then we choose what seems to be less bad. Presently, for survivors of sex trafficking, the option of being incarcerated in shelter homes, where they have no rights to freedom, mobility, choices of what to eat and where, whom to talk to, when to leave are all taken away from them, where they have no access to legal services to fight for their freedom, where they are held hostage by the state to depose in trials that may take years for investigation and prosecution, is worse than being in sex work. It may not mean that they are used to sex work, they want to be sex workers or any other meaning we may make of it. If we really wish to understand why these 14 women would have run away from shelter homes, please listen to survivors who have been incarcerated in shelter homes for years.

As an organisation having run shelter homes for years, we would be happy to support this dialogue between survivors of sex trafficking who have stayed in shelters and the Women and Child Development Departments of Telangana and Andhra Pradesh and other states of India.