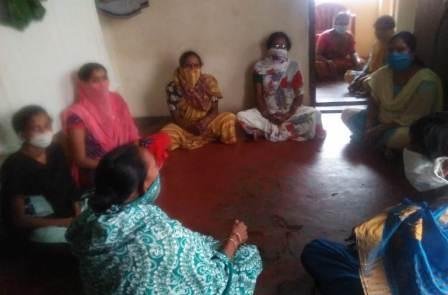 Non-Governmental Organisations working in areas of sex trafficking, commercial sexual exploitation and women forced into prostitution, based in Andhra Pradesh, have urged the State government to provide ₹5,000 monthly assistance to sex workers.

Vimukthi and Indian Leadership Forum Against Trafficking (ILFAT), a national platform formed by survivors of human trafficking, said that the Government of Andhra Pradesh has already announced free ration distribution to sex workers who are participating in the activities under Andhra Pradesh State AIDS Control Society.

The Supreme Court of India has instructed the State Governments to distribute free ration to sex workers along with the benefits provided to all other categories of beneficiaries during the lockdown under COVID relief support services.

The NGOs said that the Maharashtra government has already been distributing dry ration to all sex workers along with ₹5,000 monthly cash transfer for three months right from October to December 2020 through the Department of Women Development and Child Welfare.

Simultaneously, the Maharashtra government is distributing ₹2,500 to school going children of sex workers for which ₹52 crore has been released from the Chief Minister’s Relief Fund.

It’s a great pleasure to our rescued victims of trafficking and sex workers to realise that, the Govt. of Andhra Pradesh has announced free ration distribution to the sex workers registered and who are participating in the activities under Andhra Pradesh State AIDS Control Society.

The Hon’ble Supreme Court of India has instructed all the state governments while responding to a Criminal appeal No. 135/2010 filed in a case between Buddhadev Karmaskar Vs West Bengal and others to distribute free ration to the sex workers along with the benefits provided to all other categories of beneficiaries during lockdown period under COVID relief support services.

The Govt. of Maharashtra has stated to distribute dry ration to all the sex workers along with Rs. 5000/- monthly cash transfer for 3 months right from Oct to Dec 2020 through the Dept. of Women Development and Child Welfare. Simultaneously, it is distributing Rs. 2500/- cash support to the school going children of the sex workers for which Rs. 52 crores has been released from the CM relief fund. (pl find attached document for your kind reference)

When we heard the Supreme Court direct all governments to give us rations without any questions or demands for identity proof, we were relieved. As Vimukthi, we have been pleading with our state government to help us. We kept hearing about APSACS trying to find out the exact number of sex workers who should be given rations. Days passed onto weeks, and onto months, but nothing seemed to move or work. So, the Supreme Court’s concern for our survival seemed like a beacon of hope.

We are in a dire situation and are at the worse end of this humanitarian crisis. To aid this pursuit of ours we urge you to grant access to ration for food, water, medicines, and a chance to rebuild our lives so that we don’t die of hunger and disease.

We sincerely count on your support to live through these terrible times of crisis and we back our hopes of survival on your government’s aid and relief to vulnerable communities such as ours. We hope you shall be able to grant our needs and relief would reach us at earliest.